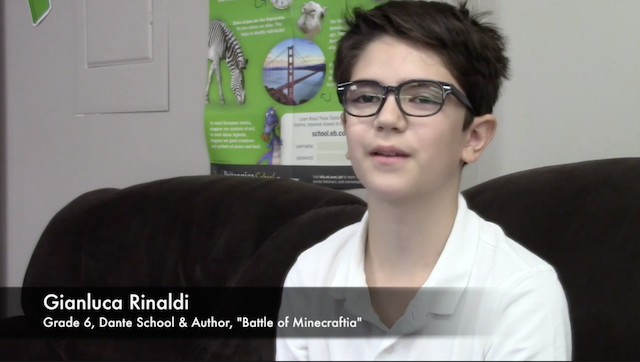 On the occasion of World Literacy Day, Grade 6 student Gianluca Rinaldi from Dante Elementary School in St. Léonard has announced the publication of his first book.

After Gianluca’s mother published a book in 2014, he loved it so much that he thought he should follow her lead. Fast-forward two years and his book called Battle of Minecraftia is now available on Amazon for all of the world to see.

Based upon the game of Minecraft, the book follows his character as he defends the world from an unknown enemy. Furthermore, the character, Superblokz, reflects his own personality, down to his sense of humor, love for animals and eating habits – Gianluca is a vegetarian.

“My family and my classmates really supported me. I am truly humbled that people actually liked the book,” said Gianluca. “Sometimes we would have to do book reports and people would do it on my book.”

Gianluca credits his interest in writing to his mother, as well as his love for reading.  “I love writing, [but] reading is nice because you get to learn so much from the books that you read,” he added. “It is also a nice way to keep yourself entertained.”

As for any of his classmates interested in writing their own books, Gianluca offers some simple advice. “Do not think it is too hard, you have to just take the plunge,” he said. “[My book] took two years to write. We started it, then it came to a halt, and then we decided to take it up again. It was a good story and I wanted to build on it. I decided to continue and then I published it.”

Gianluca`s mother is a Montreal lifestyles blogger who goes by the name Nuccia.