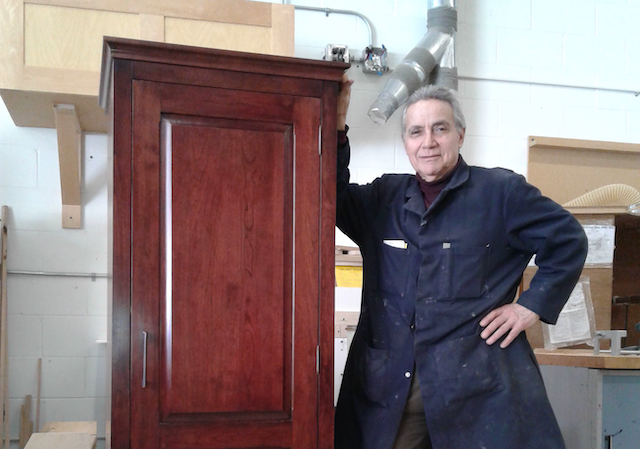 Not many in their 70s can claim the knowledge acquisition that Gabriele Santilli has. At 73,  Mr. Santilli is Rosemount Technology Centre’s (RTC) oldest student. Of the school’s eight vocational programs, he has completed four, and is going strong in a fifth.

An inspiration to most people given his love of learning and commitment to his own personal growth, he serves as a role model to his fellow students and, he said, this has been especially meaningful. Affectionally called “Signor Gaby” or “Grandad,” classmates will often seek him out for help before they even see their teacher. Teachers are busy, he said, and “it’s a pleasure” to be able to help.

When Mr. Santilli retired from the workforce in 2015 it became immediately clear that he didn’t want to spend his time “going to the bar and arguing with old men like me about stupidities. I spoke to my wife, who is an educational counsellor with UQAM. She found RTC and said ‘hey, let’s go and see what it’s all about.’” Thus, started his educational career at Rosemount Technology Centre.

The skillsets he developed during his working life in mechanics for flight simulation systems and others related to the pharmaceutical industry among others were very different than what he was about to learn at vocational school. First, he delved into RTC’s Industrial Drafting course. This proved to be “too much sitting down,” said Mr. Santilli, who admitted he likes working with his hands. Next, he enrolled in Cabinetmaking. “I had a ball; I loved it!” he said.

Then came Furniture Finishing, followed by Digital Graphics Technology (or training in printing), and finally Electromechanics. Despite his life and work experience, he admitted he still gets very nervous when it’s time to be evaluated.

Of the five programs, which was his favourite? “Cabinet making,” he said. “I love the smell of wood. I see what you can achieve from the efforts.”

Mr. Santilli found the most satisfaction learning to use milling machines. “You have to be deadly accurate, and this pushes me to do better than cabinet making,” he said. “Wood gives you a sense of pride. Whatever I do at the end, I’ve achieved something.”

While Mr. Santilli may be in the minority as a retired septuagenarian being trained in the vocations, he offers some insight into why this type of education is so beneficial for many of his younger counterparts. “In the workforce, you have to like to your job,” he said. “This model works well for so many because not everybody is meant to go to university. They have to find out what they really want. They can eventually make a good living after spending a year or two in school. Companies need specialized people. And if these guys are willing to put in the effort, I don’t think there will be a shortage of jobs for them.”

Mr. Santilli’s curriculum involves six hours a day each weekday, with  very few taken off for sick days. He likes to start his typical day with an espresso at his favourite Italian coffee bar, then it’s off to school with his homemade lunch of a panino and apple. He said he has made many friends at the school, and that many of them look out for him.

This past summer, Mr. Santilli’s welding module took place during a heat wave. It physically took a lot out for him, he said. One classmate, concerned for his health, checked in on him constantly, and ultimately called him a “tough little bugger” because he was able to work through the heat.

What’s next for Mr. Santilli after his graduation, set for September 2022? Despite all the training, he doesn’t want to work even if he’s offered a job. He took these courses for his health and personal growth, he said. With a love of history, and a special interest in the Roman Empire, history courses are on the horizon – and cooking school, maybe at St. Pius X Career Centre. And he might sign up for the Machining Techniques course at RTC.

Mr. Santilli said he’d like to return to his hometown in Italy, where he left when he was 17. He’d like to travel with his wife when she retires and has his sights set on Turkey and Jerusalem. But right now, he’s happy being a student of the trades and going to school every day.

At 73, this Montreal school's oldest pupil is also its star, and he's just getting started (CTV Montreal) from EMSBTV on Vimeo.

About the English Montreal School Board

With a youth and adult sector population of more than 35,000 students, the English Montreal School Board (EMSB) is the largest English public school board in Quebec. Established on July 1, 1998, when the province created new boards along linguistic lines, the EMSB network consists of 77 schools and centres. For more details, visit the EMSB website at www.emsb.qc.ca.